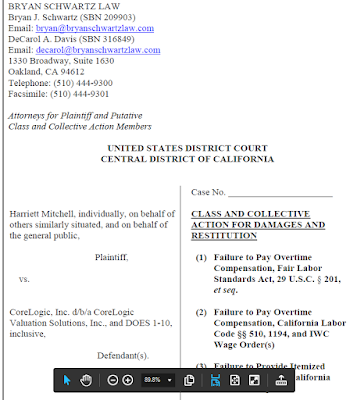 AA residential staff appraiser has filed an overtime class action lawsuit against appraisal management company CoreLogic Valuation Solutions. The appraiser is a current employee and works as a staff appraiser in Southern California.  On behalf of herself and a putative class of similar CoreLogic staff appraisers, she alleges that CoreLogic’s compensation practices violate the overtime pay requirements of the federal Fair Labor Standards Act and California state labor laws.  The case will be legally interesting to watch because CoreLogic allegedly pays its employee appraisers on a partially “piece work” per appraisal basis with additional compensation based on production and other factors. The plaintiff alleges that she and other staff appraisers “frequently are required to work far in excess of forty hours per week,” but that their compensation for the overtime hours do not properly include the “bonus pay” in calculating overtime compensation.  Under the law, the overtime rate of pay must be 1.5x the overall regular hourly rate (or 2x for double time), even when the employee is paid on a piece work basis. Many appraisal firms pay their staff employee appraisers per appraisal and it will relevant for such firms to follow this case.

The lead attorney behind the case – Bryan Schwartz – is the same attorney who led a successful appraiser overtime class action against LandSafe Appraisal that resulted in a $36 million settlement in May 2015.  Later that same year, CoreLogic purchased LandSafe from Bank America for a reported $70 million.  There are likely fewer appraisers in the proposed class against CoreLogic, however, and the central allegation is not that CoreLogic failed to pay overtime at all but rather that the overtime rate was not calculated in a technically correct manner.  It’s expected that the alleged unpaid overtime compensation will be far less, both for each appraiser who opts into the case and overall, than in the earlier LandSafe case.  Nevertheless, as of January 31, 12 appraisers from around the country already had signed opt-in consents to join the case (without waiting until a class is officially certified).

The new case is presently before the same judge – the Hon. David Carter in the U.S. District Court for the Central District of California – who heard the earlier LandSafe case.  In that case, Judge Carter issued a key order ruling that LandSafe’s staff appraisers were not properly treated as exempt from overtime.  That order created a ripple of overtime liability claims  against other large appraisal businesses.

As a general matter, overtime cases filed by employee appraisers continue to affect many large appraisal firms, as well as lenders who employ staff production appraisers or reviewers.  The attorney leading the new CoreLogic case also has filed appraiser overtime suits against JP Morgan Chase, BB&T and Solidifi. Last year, other attorneys based in Texas solicited appraisers to pursue overtime cases with a mass mailing.  Those attorneys then filed two overtime cases — one against TSI Appraisal and the other against a smaller firm in California.

In all of these overtime cases, the plaintiff appraisers essentially claim that “appraisers are not professionals” for the purpose of overtime exemptions under the Fair Labor Standards Act (FLSA). To justify that position, the appraisers allege their work is too routinized, too form-based and too closely supervised to qualify for “professional” status.  Class claims under the FLSA are voluntary opt-in class actions, meaning that appraisers only become plaintiffs if they affirmatively choose to join in a case by filling out an opt-in form that is filed with the court. (In a recent case in California, the plaintiff’s attorneys actually abandoned a class action claim — it seemed that too few appraisers expressed interest in joining the action to justify a class. This won’t seem to be an issue in the CoreLogic lawsuit.)


It’s awkward but . . . here’s the “I told you so.”  Overtime litigation against appraisal firms was a coming trend that I reported and warned about here on this blog many years ago and also warned about during compliance events.  In February 2013 (before the big case against LandSafe was even filed later that year), I wrote about a few small overtime cases and warned that “I do believe that many appraisal firms and AMCs may be at risk for similar litigation involving overtime issues and that these three cases could lead to future additional litigation against other firms.”  Here is that 2013 post: “Overtime Lawsuits Affecting Appraisal Firms, Lenders and AMCs.”  Five years later, appraisal firms, lenders and AMCs have now collectively paid more than $50 million in unpaid overtime, together with penalties, interest and attorneys fees.
Here’s a warning about a fresh related employment law issue: a new trend touching more appraisal firms and similar businessesis the classification of workers as independent contractors, rather than as employees.  In these suits, plaintiff workers argue that they were improperly classified by firms as independent contractors and then claim that, if they had been treated properly as employees, they would have been entitled to compensation for overtime, as well as reimbursement for expenses.  I have addressed this subject in a recent article that appeared in the Appraisal Institute’s Valuation magazine. The article “Independent Minded” is available here (link to on-line version of magazine).